Federation has several use-cases; collect messages from multiple clusters to a central cluster, distribute load of one queue to multiple other clusters and when migrating to another cluster without stopping all producers/consumers while doing so. 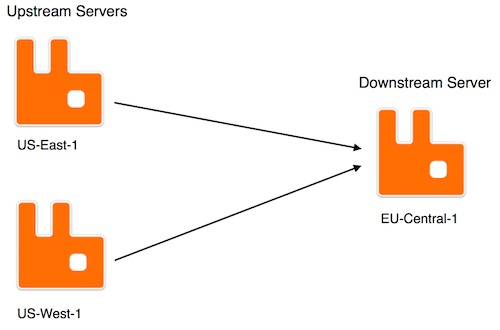 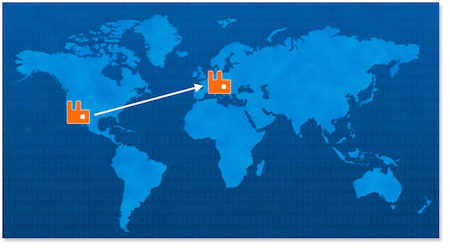 Usually when RabbitMQ is used are messages published to an exchange and the messages are then routed to the queue or the queues. With use of exchange federation it is possible to get RabbitMQ to distribute those messages to any other clusters. That means messages arriving to those federated exchanges will also be forwarded to the downstream clusters. Exchange federation consumes messages from an upstream cluster and republishes on it's own local exchange, as if the messages published on the upstream cluster were published on the local cluster. A situation where exchange federation could be used is when there are clusters in multiple regions, but you want to collect all messages to a central cluster where your consumers can process them. The federation act as an intelligent shovel, so it will create a queue on the upstream cluster, bind it to the exchange you're federating and then consume from that queue and republish them on the local exchange. If the connection is broken messages will queue up on the upstream queue and when the server reconnects again it will transfer all messages that were publish during the network outage.

Queue federation connects an upstream queue to transfer messages to the downstream queue when there's consumers that has capacity on the downstream queue. This creates intelligent load balancing between clusters. It's also good when migrating between two clusters. Consumers and publishers can be moved in any order and the messages won't be duplicated (which is the case if you do exchange federation) but transferred to the new cluster when your consumers are there. The federated queue will only retrieve messages when it has run out of messages locally, it has consumers that need messages, and the upstream queue has "spare" messages that are not being consumed. Federated queues allows higher capacity than a single queue. Read Cluster migration with RabbitMQ Queue Federation for more information on the topic.

A use case for federated queues is when the broker is operating at its maximum capacity. By federating queues, other brokers and their consumers can help out by take messages from the queue on the upstream server. For example, you might have producers and consumers in multiple locations, and you want your queues in "US-East-1" to get help from "EU-Central-1" when one is busier than the other.

The Shovel plugin is another plugin that can be used to balance the load of a queue. Shovel is a plugin for RabbitMQ that enables you to define replication relationships between a queue on one RabbitMQ server and an exchange on another.

Definition from RabbitMQ: "A plug-in for RabbitMQ that shovels messages from a queue on one broker to an exchange on another broker."

Compared to clustering can federation and shovel be used over WAN. Clustering is for joining several brokers in one location to enable scalable routing.

Getting Started with RabbitMQ Federations and Node.js

It is time to setup the exchange federation between two RabbitMQ nodes. All CloudAMQP dedicated instances comes with the federation plugin enabled. This example show how to set up federation from the management interface. Any language can be used to create the bindings, queues and exchanges. An example of how to set up the queues, exchanges and bindings in Node.js is shown in the bottom of this article.

Define the Upstream for the downstream server

We have to start by setting up the downstream cluster (the server that the messages will be forward to, in this case 'EU-Central-1'). To do this we need the URI to the upstream server. Open the management interface for the downstream server and go to the 'Admin'->'Federation Upstreams' screen and press 'Add a new upstream'. Fill in all information needed, the URI should be the URI of the upstream server. The expiry time is the time in milliseconds, after which an upstream queue for a federated exchange may be deleted, if a connection to the upstream broker is lost. TTL is in this example set to one hour, meaning that all messages will stay for one hour. If one cluster goes down, will the other cluster have all the messages from the last hour.

Note: Be sure to have the correct virtual host selected all the time. 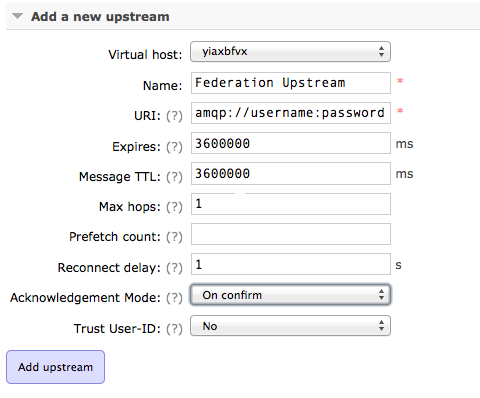 Create a policy that selects a set of exchanges, and applies a single upstream to the objects.

The "pattern" argument is a regular expression used to match exchange or queue names. In this case we tell the policy to federate all exchanges whose names begin with "federation.".

A policy can apply to an upstream set or a single upstream of exchanges and/or queues. In this example do we apply to all upstreams, federation-upstream-set is set to all.

NOTE: Policies are matched every time an exchange or queue is created.

We then need to create message queues, exchanges and the bindings for the downstream server. The fastest and easiest way to set up this is by using any programming language, it can also be done directly from the management interface. Sample code for Node.js and the client library amqplib , can be found in the bottom of this article.

The federated exchange will connect to all its upstream exchanges using AMQP. The exchanges for the downstream server should look like in the picture below.

The sample code below show how to set up a connection to the RabbitMQ server. It also shows how to set up the demoqueue and the federation.exchange to that queue. You have to create the queues and the exchanges on both the upstream and the downstream server.

Start by adding amqplib as a dependency to your package.json file.

If you like to set up the federation from the console do I recommend this article from Jacenter.com, Distributed log aggregation with RabbitMQ Federation.

More information about how to get started with CloudAMQP and guides for various languages and platforms can be found here.